Dr. Ted Higgins has had a heart for Haiti since 1981. During his fourth year of general surgery residency at Yale, he and his wife, Kim, spent a three-month rotation at Hospital Albert Schweitzer in DesChapelles, Haiti. They were touched by the Haitian people, their culture, and their needs. They were inspired by Dr. Larimer and Gwen Mellon who devoted their lives to transformative work in healthcare, local economies, and access to water.

Through their church in Kansas City, Ted began annual trips to the Dominican Republic where teams provided healthcare to sugar cane cutters and their families in the bateys. Seeing surgical needs of all kinds, Ted began operating in a borrowed clinic in 1992, when the Good Samaritan Hospital was a dream under construction. It’s now a busy hospital with Dominican surgeons on staff; Ted trained the Dominican surgeons to perform both laparoscopic abdominal procedures as well as vascular access procedures for patients with end stage renal disease.

In 2010 following the earthquake, Ted returned to Haiti with mission teams to help with surgical cases in the region. Several teams a year would travel to help provide surgical care. Because of the lack of surgical care in Haiti, patients travelled from afar when mission teams were present. Medical students and surgical residents joined from the General Hospital in Port Au Prince when surgical teams arrived. This began the teaching experience that developed into a need for more surgical operating space to handle the large demand and the need to teach. Throughout his annual week-long trips to Fonds-Parisien, Ted and his team operated on about 60 patients. He appreciated the excellent accommodations and support of HCM and saw the need for more surgical capacity. In 2015, the idea of expanding the surgical capabilities was discussed and the Higgins Brothers Surgicenter for Hope (HBSH) began to take shape.

In 2015, the construction of the Higgins Brothers Surgicenter for Hope was begun. The dedication and actual official opening of the Surgicenter was in December, 2016. The Higgins Brothers name honors Ted's father, Edward, and uncle, Paul. Both surgeon brothers were inspired by their father and grandfather to carry on a busy surgical practice in Cortland, NY. Dr. Edward trained in ENT at Syracuse Upstate Medical Center under Dr. Gordon Hoople, and Dr. Paul trained in general surgery at Johns Hopkins Mdical Center under Dr Alfred Blaylock. They both served in World War ll as physicians, Edward in Europe and Paul in the Pacific, and embraced the international work of medicine. They shared a 36 year practice, and were role models for medical students, physicians, and the wider community  for their exemplary patient care and civic involvement. 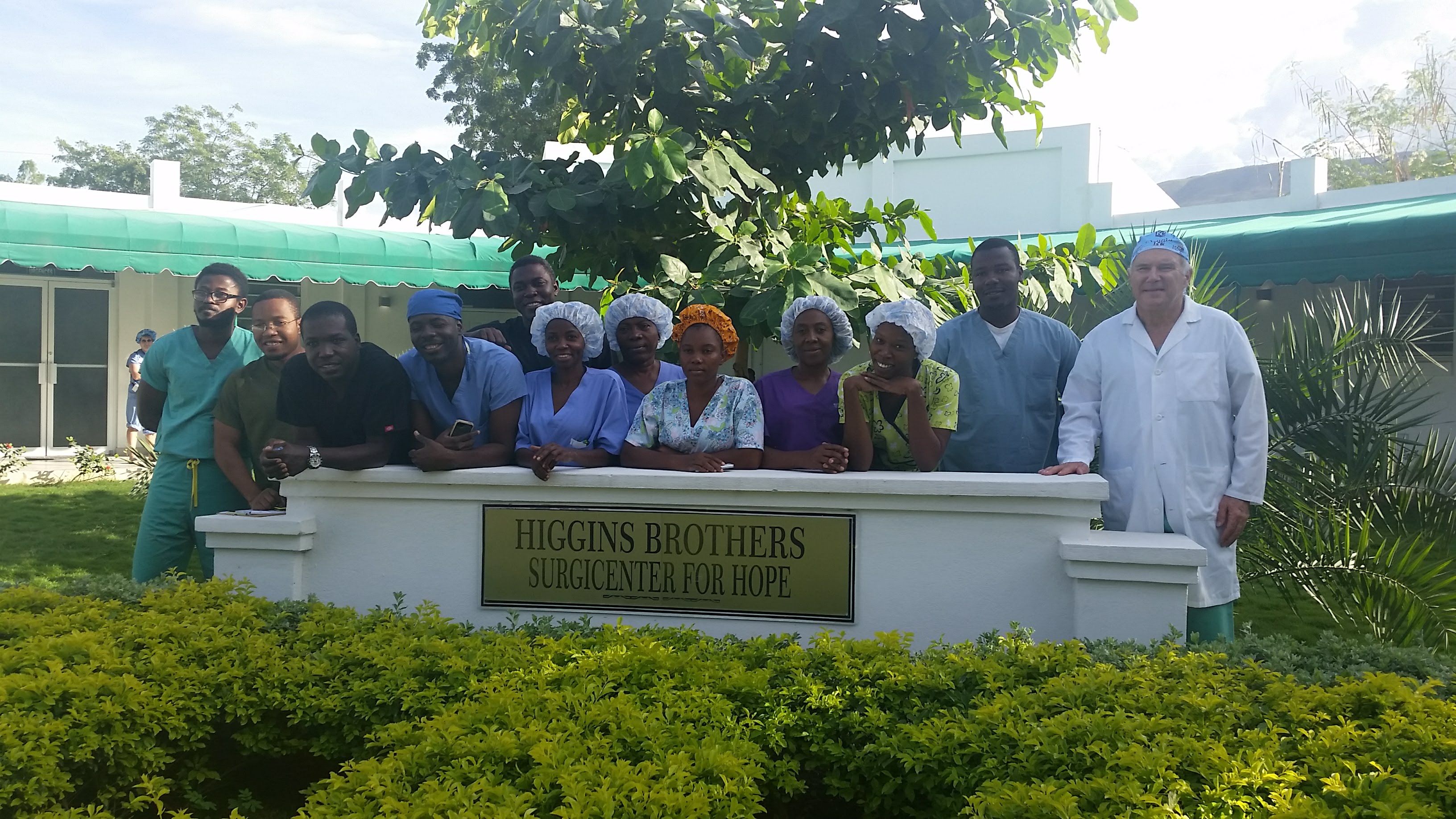 The Higgins Brothers Surgicenter for hope was dedicated on December 10th, 2016. Broadcast live on national television in Haiti, representatives from the government  ministries were present as were local town officials. It was a wonderful celebration culminating over a year of construction to build the facility.
The Surgicenter was designed to initially provide opportunities for surgical mission teams to work. Since his initial visit in 2010 to Fonds Parisien, Dr. Ted and his surgical colleagues worked with surgical residents from the General Hospital in Port Au Prince. With roughly four mission trips yearly, a teaching program was arranged for the chief surgical residents to work directly with the mission surgeons during the visits. Operating room nurses were also trained by the mission team nurses with often a close rapport developing.
In 2017, several of the fine surgical residents and anesthesia residents were finishing their training. In order to prevent them from leaving Haiti and going elsewhere to practice surgery, Dr. Ted offered them an opportunity to develop their practice at the Surgicenter, allowing the facility to remain open daily on a 24/7 schedule. This established the Surgicenter as the only surgical facility running continuously in the entire region of Haiti.
Since then, the facility  has expanded to cover trauma and emergency surgery, as well as general, vascular, obstetric, gynecological, urological, and dental surgeries. A Surgical staff of 33 doctors, nurses, technicians, and employees now manage and operate the facility. Over 700 surgical procedures were performed in 2020 with over 50 C-sections.
In January, 2020, the Higgins Brothers Surgicenter for Hope assumed management of the Christ for All Hospital previously managed by Haitian Christian Mission (HCM) ministry. This meant maintaining the various clinics, and providing hospital care for pediatric and medical patients. In order to manage the various clinics with over 20,000 patient visits yearly, the new Shawn Warren Crowley Medical Building will provide needed space and efficiency for the medical, pediatric, HIV, and dental clinics. The second floor will be dormitory space for the on-call doctor and nursing staff who provide 24/7 coverage.

Meet the Higgins Brothers Surgicenter Board of Directors

Because of the dangerous travel for our medical personnel, we are building a 22-unit medical staff living facility up the hill from the Surgicenter. This will eliminate the dangerous road travel for our employees work, and create a safe living environment. The building should be completed and ready for occupancy by May 2023.
We have also established an incentive housing program for medical providers with families. This will provide a $40,000 payment for land and building a new house. Half of this amount will be repaid with a salary deduction over a 5-7 year work commitment period at the Surgicenter.
Another living facility for families will be built adjacent to the larger medical staff housing facility. Plans are being developed for 2 and 3 bedroom accommodations that will allow our healthcare providers to relocate in the safer Fond Parisien community close to the Surgicenter and clinics.

Give online via our secure donation portal.

Or donate via PayPal